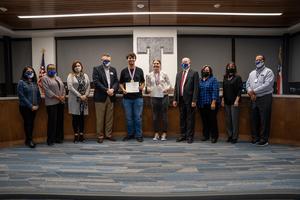 Students are among just 238 honored from across the state

TEMPLE, Texas — Two Temple High School choir students have been recognized as Outstanding Performers for their performances in the Texas State Solo and Ensemble Contest in May. The two students was also recognized at the Temple ISD board of trustees meeting Monday night (November 8).

Cody Little and Michael Barfoot are among a group of just 238 students from across the state to earn the Outstanding Performer recognition. The award represents an individual’s attainment of superior musicianship as demonstrated in the exacting competition of the Texas State Solo and Ensemble Contest. Little and Barfoot were selected in May after more than 20,000 students participated in the state contest. In addition to assigning a rating to each performer, each solo judge may designate exemplary soloists as Outstanding Performers.

“Cody Little and Michael Barfoot are two of the finest young men I’ve had the privilege of working with in my time at Temple High School. Their gifts in music are apparent, but this award is not earned by just talented individuals,” said Cameron Roucloux, head choral director at Temple High School. “The top two percent of students who compete at Texas State Solo and Ensemble Contest receive this award. This award is earned by students who have outworked everyone else. They have put in countless hours since they first stepped foot in the Temple High School Choir program, and all of that hard work came to fruition with them both earning this award. We are so proud of them and celebrate this accomplishment with them.”

Little was a four-year member of the THS Meistersingers and also performed with Polyfoniks for three years. He graduated in June of 2021. His sister, Claire accepted his award at Monday night's board meeting. Barfoot is a junior at THS and is a three-year member of Meistersingers.

More than 90,000 students participated in the University Interscholastic League’s Regional Solo and Ensemble Contest early last spring. Students who performed a Class 1 solo to receive a Superior rating at the Regional Contest qualified to advance to the state competition.