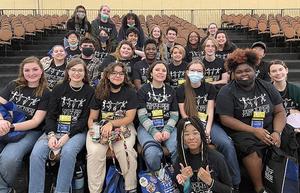 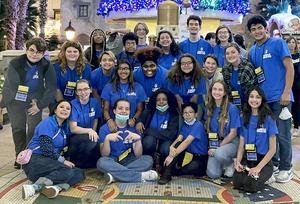 “So often in theatre, our students are recognized just for what you see on the stage,” said Natasha Tolleson, director of Temple High School Theatre Arts. “Going to the Texas Thespians contest allows all of our students to shine and be recognized. That means our technicians and designers and marketers, as well as our performers. We are judged by theatre teachers and professionals who are really the best of the best. It is just a wonderful opportunity for all of our students to shine.”

There were several other highlights during the convention for Temple students. Perkins was one of just two make-up design students to appear in the technical competition video during closing ceremonies. Gordon was one of just three marketing students to appear in that video. Prince and the group musical team were selected as mainstage finalists. Austin and Galbreath were selected as All-State performers and appeared during closing ceremonies. The dramatic design team of Austin, Boyles, Rochelle Lopez and Alyssa Maggitt won that contest as the top design in Texas and had its work for “Jekyll and Hyde” displayed throughout the convention. Hanna Prince was also just one of 40 students selected to receive a $1,000 scholarship out of the nearly 7,000 students attending the convention. Many of the Temple students also receive college callbacks following the competition.