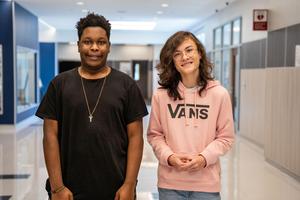 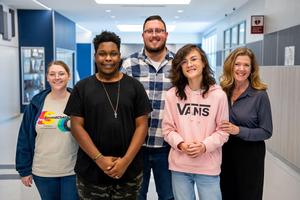 TEMPLE, Texas — Two Temple High School students have earned All-State Choir recognition from the Texas Music Educators Association (TMEA). Terry Austin and Josh Liller both earned All-State honors and the duo will be recognized during the TMEA Convention in San Antonio in February.

Senior Terry Austin earned All-State honors as a Tenor I. He is a three-year member of both Polyfoniks and the THS Meistersingers. Austin is also active in the THS Theatre Arts program.

“I feel really blessed to have been selected to the All-State Tenor-Bass Choir,” Austin said. “I’ve worked so hard for the past three years towards this goal. Now that I have accomplished it, I feel motivated to work even harder and continue pushing myself towards my dream of becoming a music educator.”

Sophomore Josh Liller earned All-State honors as a Bass I. He is also a member of both Polyfoniks and the THS Meistersingers. Liller is in his first year of singing with both choirs.

“I honestly hadn’t believed I would advance in the previous round of auditions, but I was ecstatic and surprised to see I had made Area in fourth chair,” Liller said. “I was as rigorous in my preparation as I was able to be, because I knew this could have a big impact on my options for the future. The one thing I was proudest of myself for doing was gathering confidence in myself for the audition and calming my nervous energy.”

The audition process started early in the fall with over 70,000 students auditioning for roles in the All-State Choir. Only 28 students are chosen in each category for spots on the honor choir.

“Being selected for the Texas All State Choir is the highest honor a choral student in the state of Texas can achieve,” said Cameron Roucloux, head director for Temple High School Choir Department. “This process begins in July when these students go to camp to get a jump on the music for the following year. Terry and Josh both placed in the top five chairs at both the region and pre-area rounds. The area round of auditions is by far the most competitive audition. Our region competes with North Austin, up to South DFW, and over to Tyler. This audition has 20 students who are competing for seven spots. Each of these students is top five from their own region. So, to have both Terry and Josh to make the choir is an incredible honor. This speaks to their hard work, dedication, and perseverance. This is the first time since 2014 that this program has had two All State students in the same year. Ms. Burt, Mrs. Mischtian, and I are so incredibly proud of both of these students and cannot wait to see them perform with the All State Tenor-Bass Choir.”