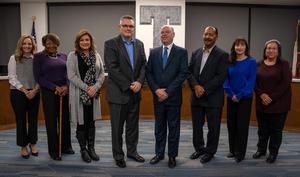 Board of Trustees will be honored during January board meeting

TEMPLE, Texas — The month of January is designated School Board Recognition Month by the Texas Association of School Boards (TASB) each year. The Temple Independent School District is celebrating its seven elected trustees and will take the opportunity to say thank you and honor Temple’s board of trustees during the board’s monthly meeting Tuesday night (January 10th).

The Temple ISD board of trustees serves as a link between the community and the classroom and members are elected to establish the policies that provide the framework for Temple schools. Temple’s board of trustees was named the Region 12 Board of the Year in 2020-21 and finished as one of five Honor School Boards in the state. The TISD board is responsible for more than 8,600 students, roughly 1,400 employees and 15 campuses and volunteers hundreds of hours to the district through its service each year The board of trustees has also helped guide the district through the challenges of the pandemic over the last three years and helped support Bobby Ott’s recognition as TASB Texas Superintendent of the Year and nomination for AASA National Superintendent of the Year. The board worked on the passage of the district’s $164.8 million bond package last May and has overseen the implementation of several of those bond projects. Not only did the bond package pass without an increase to the district’s tax rate but TISD was able to lower its tax rate for the fifth consecutive year.

“Serving on the Temple ISD Board of Trustees has been the most rewarding experience of my life. It is extremely gratifying to work with our ‘Team of Eight’ on efforts to improve and enhance the educational experiences our students receive in Temple ISD,” Dan Posey, president of the TISD board of trustees, said. “It is a privilege to serve with fellow board members and our superintendent with a common goal of doing what is best for our students.”

“A significant difference in high and low-performing organizations can often times be linked back to their quality of governance. The Temple ISD Board of Trustees is committed to excellence, accountability, conservative values, professionalism and transparency. These governing attributes start with our school board and cascade throughout the entire organization,” Ott said. “I believe these are reasons behind Temple ISD being a high-performing school system, and one that is recognized at the regional and state level. We are blessed by their service.”

Campus administrators will present gifts to each trustee on behalf of the students, teachers, coaches, staff and communities they represent at Tuesday’s board meeting.