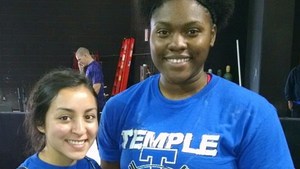 Behind by close to 60 pounds going into the final lift, Timmea Joiner-Hargrove to break the state record by 45 pounds to win the 5A State Powerlifting Title. All we can say is it was awesome to watch!
Timmea Joiner-Hargrove capped a record setting senior year by winning the Class 5A State Championship in the girls 220 lb. weight division held at the Corpus Christi convention center.

Joiner-Hargrove, who had set meet records over the course of the season, concluded her year once again by setting a pair of state records. She set a Class 5A record in the 220 lb. division for both the deadlift at 455 lbs. and total lift of 1050 lbs.

Joiner-Hargrove defeated her second place opponent 1050-1035 in total pounds lifted. Her day included lifts of 400 in the squat, 195 bench and 455 deadlift. She actually trailed Luciana Zamora of Gregory Portland 660-595 after the bench and squat lifts. However, the state record of 455 lbs in the dead lift far out lifted Zamora’s 375 lb. lift for the title.

Temple finished as a team 11th out 32 teams represented in the team title competition.