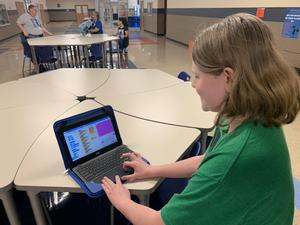 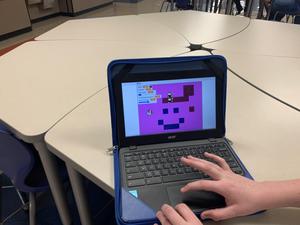 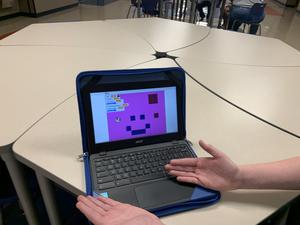 TEMPLE, Texas — Students at Bonham Middle School in the Temple Independent School District are combining classroom learning with identifying and addressing social issues impacting the local community as part of a new partnership. Technology classes at BMS are participating in a partnership with Meta’s Engineer for the Week program this school year.

Meta’s Engineer for the Week program started in 2018 and sets up a framework for students to choose a social issue, research that issue and then come up with a project to address or help raise awareness of the issue. The program allowed students in Richard Johnson’s Technology classes to address a variety of issues and come up with some unique ways to address those problems and educate the community about them. Between 40-45 of the students in Johnson’s classes participated in the program in the fall and presented their ideas and projects shortly before their final exam.

“I wanted to bring their attention to different issues and see what was important to them. Several groups wanted to address homelessness, or pollution, or the safety of Halloween candy that might be laced with drugs,” Johnson said. “They were able to come up with ideas of robots to collect trash since it can be hard to find volunteers to do it or they created projects to educate parents and children on ways to examine the candy. I saw a lot of kids really put a lot of effort into their projects and coming up with ideas. I was impressed with how many came up with actual programs or games to address their issues.”

Eighth grader Joshua Forsythe chose the issue of littering and pollution and began creating a computer game to help educate the public on the issue and ways they can help. His project started as a group venture, but he continues to work on it by himself and even though the fall semester is over, Forsythe plans to keep working on his game design because he understands what it could mean.

“I want people to learn that they can make a difference when it comes to pollution. They can pick up litter to help the environment and can make the world a better place eventually,” Forsythe said. “I have had a lot of fun working on this project even though the scope of it caused me a little stress. I want to keep working on this and see it through because it can make a difference.”

Forsythe says he sees game design as more of a hobby in the future than a potential career path, but he already has some ideas for new games he wants to design. He has also enjoyed the opportunity to learn more about ways to address social issues. Classmate John Justice agrees with that. Justice worked on a project to help raise awareness of homelessness and would like to use social media apps to promote the idea of temporary structures to provide shelter for homeless people to use.

“Trying to figure out ways to help people has been the best part of this,” Justice said. “I really learned just how many people are affected and that’s why I chose this as my project. I plan to keep going with this even though the semester ended because I want to raise awareness.”

The classes will continue to participate in the program this spring with students working in new groups and coming up with new issues and new projects. Eighth grader Benjie Stoebner is trying to decide between global warming or a new way to bring “new math” and “old math” instruction together for his spring project. But he has already decided that he is looking forward to working on whichever project he settles on.

“It is kind of surreal to know that you are working on a project and coming up with something that may actually make a difference.” Stoebner said.

And that’s exactly what Johnson was hoping the outcome would be for this program and his students. He is also looking forward to the spring projects and the impact the program will have on his students and potentially the community and world.

“I think we will have better participation and better responses because now the students know what is expected and they are already starting to plan out what they want to address and work on this spring,” Johnson said. “I am excited that the students are seeing it as a different way to learn and I hope it helps them realize that this is what society is looking for. Companies want people who have the ability to produce or demonstrate something that addresses a specific problem or issue and that’s what these students are doing.”